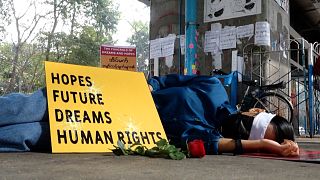 Myanmar protesters out in force after military shut down internet

Hundreds of anti-coup protesters gathered at the Hledan junction in Yangon on Tuesday, after Myanmar's generals imposed a second straight overnight internet shutdown.

The move by the military flew in the face of international condemnation as they worked to grind down a popular uprising against their coup.

In the two weeks since troops ousted Aung San Suu Kyi and took the civilian leader into custody, big urban centres and isolated village communities alike have been in open revolt.

The Hledan intersection in Yangon is a key crossroads from which groups fanned out to other points, including the embassies of the United States and China.

Some protesters laid on the ground in a silent protest with their eyes covered.