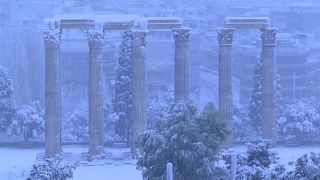 Rare heavy snow covered Athens on Tuesday morning as part of a cold weather front that has hit Greece since Friday, sending temperatures plunging from the low 20s (Celsius, or around 70 degrees Fahrenheit) on Friday to well below freezing.

Authorities appealed to the public to restrict their movements outside to the essential only, while the main highway leading north out of the capital was shut due to snowfall.

Heavy snowfall was predicted for central, southern and eastern Greece, including on the southern island of Crete.

While snow is common in Greece's north and its mountains during the winter, it is rare on the islands and in the centre of the capital.