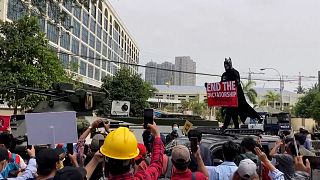 Military and police vehicles had criss-crossed the city overnight. Armoured personnel carriers were seen in several areas of the city, along with army trucks.

A near-total internet shutdown was reported on Sunday night, as mass protests against the military coup of February 1 entered their second week.

The heavy military and police presence prompted anxiety that a wave of arrests was imminent.

It isn't yet clear the extent of overnight action by the authorities against individuals associated with the protest movement.