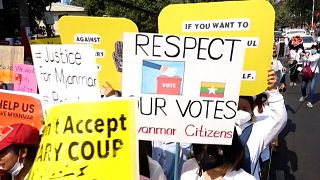 Myanmar protesters defy ban on gatherings to march against the coup

Mass demonstrations in Myanmar have entered their second week, with neither protesters nor the military government they seek to unseat showing any signs of backing off from confrontations.

In Yangon, the country's biggest city,  protesters again congregated at Hleden intersection, a key crossroads from which groups fan out to other points, including the embassies of the United States and China.

They marched despite an order banning gatherings of five or more people.

The US is regarded as an ally in the protesters' struggle against the coup, especially since President Joe Biden's announcement of sanctions against the military regime.

On the other hand, China is detested by protesters due to its allegiance with the military, and whose support is crucial to the army keeping hold of power.

This power struggle comes as a result of the military's recent ousting of de facto leader Aung San Suu Kyi and her government by preventing recently-elected lawmakers from opening a new session of parliament.