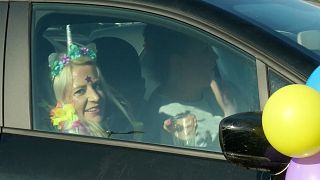 As traditional carnival celebrations were cancelled, revellers had an opportunity to attend live performances while complying with the country's social distancing regulations.

Local band ''Brings'' was the first to go on a stage set up in a Cologne parking lot in front of a small football stadium, performing for almost 1,000 carnival fans in 300 cars.

Each car was allowed to hold a maximum of three persons from two different households and the fans were asked to stay inside their cars for the entire concerts.

Security staff were constantly checking to ensure there were no breaches of the rules, while exits from the cars were only permitted for toilet breaks.

As the bands were playing live on stage, the performances were broadcast on a big screen and the sound was transmitted to the cars wirelessly.

After neighbourhood complaints at similar events, the use of the car horn was strictly prohibited, though fans could order food and drinks from their cars.

In Cologne, the western city whose Carnival festivities are perhaps the best known, Mayor Henriette Reker appealed for residents to stay home and bide their time until next year’s celebrations.