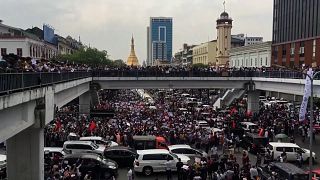 Thousands of people took to the streets of Yangon on Monday protesting against last week’s coup in Myanmar.

While many rallied downtown in the former capital, others thronged the main office of the United Nations.

The organisation has spoken of its concern over a possible violent crackdown by the new authorities and has reminded them of the right to peaceful assembly.

Monday's return to the streets coincided with a call for a general strike to up the pressure on the military, who seized power following what it claimed was massive fraud in last November's general election.

There have been no signs that either protesters or the military were backing down in their argument over who is the country’s legitimate government: Aung San Suu Kyi's National League for Democracy party, which won a landslide victory in last November’s election, or the junta that formed one week ago and which claims the polls were marred by voting fraud.

Non-violent protests demanding the release of the detained Suu Kyi and restoration of her government have spread all over the country, with awareness of them growing after the authorities on Sunday lifted a brief ban on internet access.