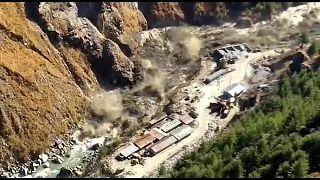 Dozens missing after a mountain glacier breaks in India

Indian authorities launched a search operation on Sunday after a mountain glacier broke, sending a massive flood of water, mud and debris into areas below and damaging homes and a power plant.

At least nine people were killed and 140 were missing, the authorities said.

The power plant was damaged by the flooding in the the Tapovan area of the northern state of Uttarakhand, said a local police official.

At least 40 people were working at the plant and their fate was unknown, another police official told New Delhi TV.

Some houses were also damaged in the flooding, according to a government spokesman.

Officials said the glacier breaking sent water trapped behind it as well as mud and other debris surging down the mountain and into other bodies of water.