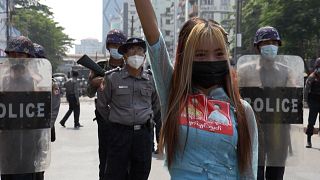 Myanmar saw its largest anti-coup protests yet on Saturday with young demonstrators spilling on to the streets to denounce the country's new military regime, despite a nationwide internet blackout aimed at stifling a growing chorus of popular dissent.

Soon before nearly all lines of communication in and out of the country went dark, an Australian adviser to ousted civilian leader Aung San Suu Kyi told media he had been detained.

The shutdown did not stop thousands of demonstrators from gathering across Myanmar's largest city on Saturday, beginning on a road near Yangon University where many flashed the three-finger salute that has come to symbolise resistance to the army takeover.

"Down with the military dictatorship!" crowds yelled, many donning red headbands -- the colour associated with Suu Kyi's National League for Democracy party.

At least two other groups of demonstrators marched south to downtown Yangon's Sule Pagoda, carrying posters of Suu Kyi and president Win Myint to call for their release.

The protests ended by dusk, and demonstrators have vowed to return to the streets on Sunday.