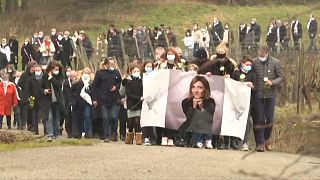 Hundreds march in memory of murdered woman in eastern Alsace

Several hundred people took part in a march in Orschwihr, in Haut-Rhin, in memory of Estelle Luce, who was murdered in the eastern Alsace region last week.

Police are investigating whether she was a victim of Gabriel Fortin, an unemployed engineer suspected of gunning down two other women in southeastern France. He has been charged with double murder.

Fortin is alleged to have shot dead an employee at a government centre and then killed another woman on the premises of a company where he worked until 2010.

Prosecutor Alex Perrin said the killings were "totally premeditated" by the 45-year-old, who was not known to the police or intelligence services.

The man first went into the employment office in the city of Valence before driving to the nearby town of Guilherand-Granges where he shot the second woman.

"He was brought before an investigating magistrate and charged with murder," Valence prosecutor Alex Perrin told AFP.

When Fortin was caught, a second handgun and ammunition were found.

The prosecutor said links to a third murder carried out in the eastern Alsace region on Tuesday were still being investigated.