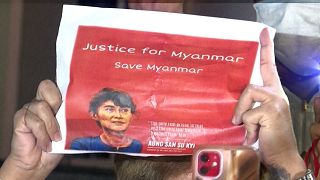 The protest is the third of its kind to take place in the city in as many days, and is largely seen as a way of peacefully protesting in a country where the military has in the past cracked down hard on demonstrations.

The military seized power shortly before a new session of Parliament was to convene on Monday and detained Suu Kyi and other top politicians.

It said it acted because the government had refused to address its complaints that last November’s general election, in which Suu Kyi’s party won a landslide victory, was marred by widespread voting irregularities. The state Election Commission has refuted the allegations.

The applause in Yangon on Thursday came as about 70 recently elected lawmakers defied the new military government on Thursday by convening a symbolic meeting of the Parliament that was prevented from opening, signing oaths of office at a government guesthouse in the capital, Naypyitaw, where about 400 of them were detained in the aftermath of the takeover.

They have since been told they can return to their home districts.

Burmese people in Thailand staged a protest against the coup in front of the Myanmar Embassy in Bangkok. The protesters burned and stamped on posters of Senior General Min Aung Hlaing, wrote messages in support of Aung San Suu Kyi, and held up the three-fingered salute borrowed from the Thai pro-democracy movement.