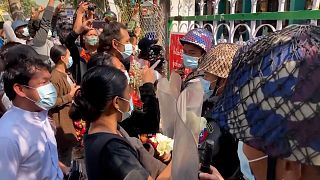 The activists were arrested in Mandalay on Thursday.

Their backers, some holding flowers, turned up at their court appearance but were stopped from entering by police.

Instead, they stood outside and flashed the three-finger protest gesture which has become a symbol of defiance during civil disobedience gatherings in recent days for those who are against Monday's coup that ousted the elected government and its leader, Aung San Suu Kyi.

They also sang the song "Kabar Makyay Bu" — or "We Won't Be Satisfied Until the End of the World" — which is sung to the tune of "Dust in the Wind," a 1977 song by the US rock group Kansas.

Recent protests have revived the song closely associated with the failed 1988 uprising against the military dictatorship.