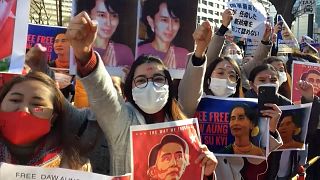 Protesters call for Tokyo to act over military coup in Myanmar

These demonstrators gathered outside Japan's foreign affairs ministry on Wednesday calling for Tokyo to take action over the military coup in Myanmar.

The takeover came earlier this week as the country's new parliament was set to sit for the first time following elections last year.

Katsunobu Kato, Japan's Chief Cabinet Secretary, told reporters on Monday that Tokyo has been strongly supporting the democratisation process in Myanmar, including that issues with last year's general election should be solved by dialogue.