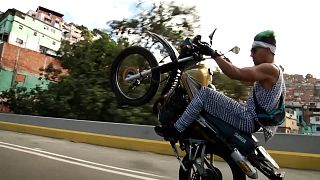 Motorcycle stunt rider and adrenalin junkie Pedro Aldana draws masses of Venezuelans starved for entertainment to his street shows across the country.

Aldana, who prefers the nickname "Crazy Pedro," also teaches boys and young men who flock to his shop in a poor neighborhood of Caracas the basics of motorcycle maintenance.

The improvised performances consist of swarming motorcyclists pulling wheelies at high speed, often standing on one foot or a knee from the seat or the back footpeg.

Among other maneuvers, they turn tight circles in a group, each rider hopping from a normal seated position to sidesaddle with the front wheel sky-high, while others make a high-speed run with both wheels on the ground and then brake hard, popping a back end wheelie that appears dangerously close to flipping over.

Aldana said they use their daily motorcycles or the ones they use for work to perform the tricks. For him, "a great revolution in the movement of motorcycles has been created."

The crew usually rides the streets trying to find a place where the police won't interrupt their show.

Motorcycle rider Carlos Blanco said that if authorities show up when they are performing and do not support the event, the group just head to another place to continue with their sport.

On Sunday, a squad of soldiers in a poor Caracas neighborhood preempted their performance before getting started.

Led by Aldana, the caravan drove in a mad dash across Caracas into the sweeping barrio of Petare, one of the biggest in Venezuela.