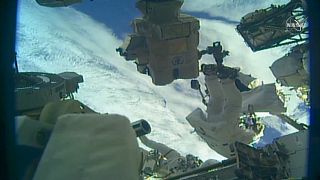 Astronauts go on a spacewalk to enhance International Space Station

A four-year effort to modernise the International Space Station's power grid is coming to an end.

NASA astronauts ventured out on a spacewalk Monday to install the last battery component. It's the second spacewalk in five days for Mike Hopkins and Victor Glover.

Over the weekend, flight controllers in Houston used the station's big robot arm to replace the last batch of old-style batteries with a new, more powerful one.

Hopkins and Glover will put the finishing touches on these newest lithium-ion batteries.

Their work completes a series of spacewalks that began in 2017.