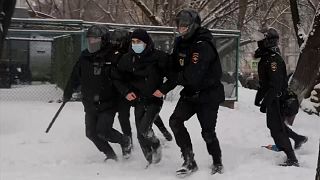 Police on Sunday detained protestors outside the Matrosskaya Tishina prison in Moscow, where jailed opposition leader Alexei Navalny is supposedly being held.

It came as tens of thousands of people took to the streets across the country to demand Navalny's release.

Thousands were detained by Russian police who had closed metro stations in Moscow.

Navalny, an anti-corruption investigator who is the best-known critic of President Vladimir Putin, was arrested on January 17 upon returning from Germany, where he spent five months recovering from nerve-agent poisoning that he blames on the Kremlin.

Russian authorities have rejected the accusations.