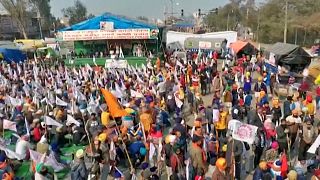 Tensions have been building around the farmers' camps since Republic Day on Tuesday, when a tractor rally turned into a citywide rampage which left one farmer dead and nearly 400 police injured.

The government has deployed thousands of extra police and paramilitaries in Delhi and around the camps since then.

Protesters are opposing reforms which aim to deregulate farm produce markets. Those protesting say the changes will let Indian conglomerates take over the farming industry.

Farming provides jobs for two thirds of India's 1.3 billion population, but the government says the industry is inefficient and the reforms will boost rural incomes.

On Friday, one police officer was wounded in the hand during a scuffle with a sword-wielding farmer, an AFP reporter at the scene said.