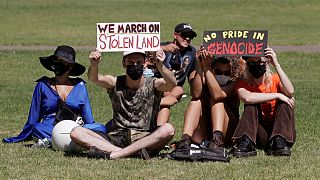 Thousands of people demonstrated on Australia Day to protest what some are calling "Invasion Day" because of historical injustices committed against indigenous people.

Protesters marched through the country's major cities, including Brisbane, Melbourne and Canberra, calling for justice.

Some carried banners and flags and shouted slogans such as "Always was, always will be Aboriginal land".

Earlier, in Australia's largest city, Sydney, many protesters wore masks and followed patterns of social distancing. There were some arrests for not following police orders.

Organisers of the protests called for the abolition of Australia Day, which recognises the day when the British navy arrived with convict ships and raised a flag signalling the intention to found a British colony.