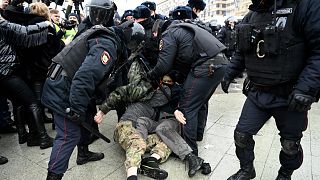 Police clashed with pro-Navalny protesters in central Moscow, in some cases beating those who attended rallies.

Arrests were made in Moscow on Saturday, after thousands converged in the city centre to demand the release of the Kremlin critic.

Officers in riot gear could be seen hitting demonstrators with batons and apprehending others.

Navalny, who is President Vladimir Putin’s most prominent critic, was arrested on January 17 when he returned to Moscow from Germany.

He had spent five months in Germany recovering from a severe nerve-agent poisoning that he blames on the Kremlin.