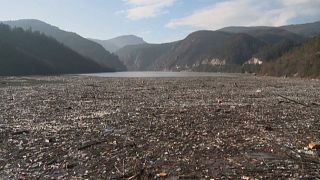 Earlier in January, islands of waste formed on the Drina River near Visegrad in Bosnia and Herzegovina. They were caused by swollen winter waters surged over landfill sites near the river banks.

There was also a build-up of rubbish at Potpecko Lake near Priboj in Serbia. The reservoir is normally a picturesque fishing spot but the smell turned away visitors.

In the Vardarishte area to the east, a once-official landfill that was closed 26 years ago is now an illegal dump that stretches some 170,000 square metres (42 acres). It sits less than one kilometre away from urban neighbourhoods.