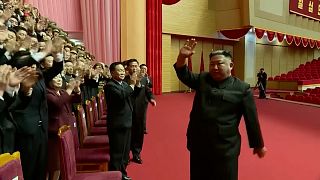 Kim revisited the cavernous April 25th House of Culture, venue of the 8th Party Congress, for a photo with a large group which state media described as the "Party central leadership body".

Top officials from the Central Committee of the Workers' Party went through the customary routine of clapping and cheering intensely as Kim arrived.

Kim Yo Jong, widely believed to be Kim Jong Un's younger sister, was visible second from left, at the far edge of the front row. There has been international speculation about her role following the Congress, because she was not listed again in the names of Political Bureau members, and one of her other known titles appeared to have changed slightly.

Big group photos like this are a North Korean tradition, going back to past leaders Kim Il Sung and Kim Jong Il.

Kim Jong Un has now gone through a long series of them with a wide variety of people involved in the Congress meeting and the military parade that followed it.

He was also shown shaking hands with all the members of the new Cabinet, announced this past Sunday, at a one-day meeting of the Supreme People's Assembly, North Korea's parliament, before sitting down for another group photo with them.

Both of these group photo gatherings took place Monday, according to the North's state media account, but were only reported on Tuesday. It's common for North Korean media to report news one day or more after it has happened.