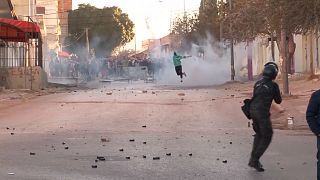 Demonstrators clashed with police in several Tunisian cities on Sunday as part of a third consecutive day of unrest a decade on from the revolution that ousted President Zine El Abidine Ben Ali.

Police used tear gas to disperse protesters in Kasserine, Siliana and other cities, including in the capital, Tunis.

Protesters are angry that the North African country is on the verge of bankruptcy and has poor public services.

Many feel disappointed that on the 10-year anniversary of the revolution brought down autocrat Ben Ali, there is little to show in terms of social and economic improvement.

On Saturday police swooped in as shops and banks were looted and vandalized, arresting "dozens" of youths, according to state news agency TAP.

Protesters blocked roads by burning tyres and throwing stones and other objects at police and businesses, according to the Interior Ministry.

The authorities deployed the army in some regions to protect private and public property, the spokesperson of the Defence Ministry, Mohamed Zakri, said during an interview with local radio.