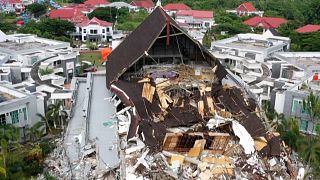 Indonesian rescuers recovered several more bodies from the rubble of houses and buildings that were toppled by a 6.2-magnitude earthquake, bringing the death toll to 56 on Sunday.

More heavy-lifting equipment arrived in the worst-affected city of Mamuju and the neighbouring district of Majene on Sulawesi Island, said Raditya Jati, a spokeswoman for the National Disaster Mitigation Agency.

A total of 47 people died in Mamuju and nine in Majene as a result of the quake, which struck on Friday.

Mamuju, the provincial capital of nearly 300,000 people, was covered with the rubble of collapsed buildings.

Buildings were reduced to piles of bricks and all that remained of a shopping centre was a crumpled shell.