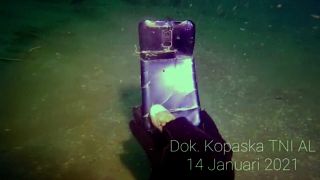 Navy divers in Indonesia continued combing the seabed north of Jakarta on Thursday, looking for the cockpit voice recorder from a crashed Indonesian plane.

A diver was filmed retrieving a battered mobile phone from a mass of debris that included chunks of wreckage and other items.

The Sriwijaya Air jet, a Boeing 737-500, disappeared Saturday minutes after taking off from Jakarta with 62 people aboard.

One black box containing flight data was recovered on Tuesday and search personnel have also recovered plane parts and human remains from the Java Sea.

At least 268 divers were deployed on Thursday, almost double the previous figure.