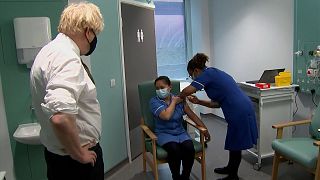 British prime minister Boris Johnson met on Monday with some of the first people to receive the new COVID-19 vaccine developed by the University of Oxford and AstraZeneca.

Johnson was visiting a London hospital where he observed some healthcare workers receiving their first dose.

The UK became the first nation in the world on Monday to start using the new Oxford-AstraZeneca vaccine, ramping up a nationwide inoculation programme as rising infection rates are putting an unprecedented strain on British hospitals.

Israelis have started to receive the vaccine made by US-German pharma alliance Pfizer-BioNTech at Clalit Health Services, in the northern city of Umm al Fahm. Israel said on Sunday two million people will have received a two-dose COVID-19 vaccination by the end of January.

Critical care nurse Sandra Lindsay, who was the first American to be vaccinated against Covid-19 on December 14 received her second dose of the Pfizer-BioNTech vaccine at a New York hospital.