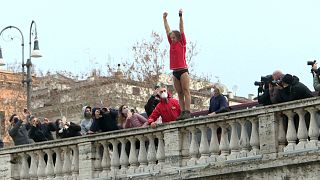 Locals welcomed in 2021 by jumping, diving and somersaulting into Rome's Tiber River.

They threw themselves off a bridge and into the fast-flowing waters, with rescue boats waiting to help them out of the water.

It's a New Year's Day tradition in the Italian capital.

The usual crowds were missing as Rome continues a partial lockdown. There were fireworks at midnight but the concerts in piazzas that typically mark New Year's Eve in Rome were cancelled to prevent crowds from forming.

Instead, the City of Rome held a live-streamed cultural event with musical performances and contemporary art installations at some of the city's most iconic locations, including a massive bonfire in the Circus Maximus.

Italy, the first country in the West to be hit by COVID-19 and has the highest death toll in Europe with more than 73,000 victims.