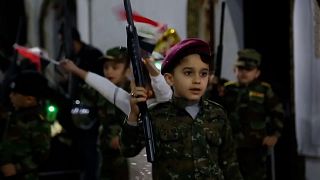 The people wished for the best in 2021 despite the bitter reality on the ground, where the country is going through a severe economic crisis, lack of job opportunities, and ongoing extremist activities.

Since an oil price crash earlier this year, Iraq has been grappling with an unprecedented liquidity crisis. The crude-exporting country had to borrow from the bank's dollar reserves to pay the nearly 5 billion US dollars in monthly fees for public salaries and pensions.

However, some Mosul residents were looking at the bright side and wished for the best as fireworks coloured the sky above them.

People gathered at the Khan Gumruk bazaar in the Old City to celebrate and welcome 2021 in a festive atmosphere.

The bazaar reopened and street vendors were all around the celebration places in both East and West Mosul.