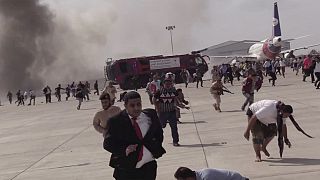 Footage emerges of deadly blast at airport in Yemen

This was the moment an explosion sent people running for cover at an airport in Yemen.

It killed at least 16 people and injured around 60.

The source of the explosions was not immediately clear.

Associated Press footage from the scene showed members of the government delegation disembarking as a first blast hit.

Ministers rushed back inside the plane or ran down the stairs, seeking shelter.

Others could be seen running across the tarmac as a second explosion struck. Thick smoke rose into the air from near the terminal building.

Yemeni Information Minister Moammar Al-Eryani said that all the members of the government were safe.

The ministers, headed by Prime Minister Maeen Abdulmalik Saeed, were returning to Aden after being sworn in last week as part of a reshuffle following a deal with rival southern separatists.

The reshuffle was seen as a major step toward closing a dangerous rift between Hadi's government and southern separatists backed by the United Arab Emirates. The Saudi-backed government is at war with Iran-allied Houthi rebels, who control most of northern Yemen as well as the country’s capital, Sanaa.

Naming a new government was part of a power-sharing deal between the Saudi-backed Hadi and the Emirati-backed separatist Southern Transitional Council, an umbrella group of militias seeking to restore an independent southern Yemen, which existed from 1967 until unification in 1990.