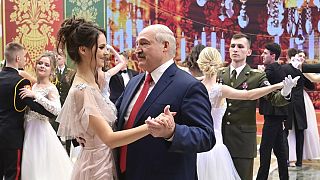 Dancing to his tune? Lukashenko pictured with youth at New Year's ball

Belarus' long-time and controversial president Alexander Lukashenko is pictured dancing with a young woman at a New Year's ball in Minsk.

The event went ahead despite the coronavirus pandemic. There was no evidence of social distancing or masks being worn.

The youth gala comes amid a difficult year for Belarus. In August, it was announced Lukashenko was the winner of a presidential election, netting an 80% vote share. His critics claimed the election was rigged in his favour.

It has prompted months of street protests, which have seen a heavy-handed response from the authorities.

At Tuesday's event, Lukashenko read a speech addressing the country's youth, admonishing them to respect traditions and fight for Belarus' sovereignty.