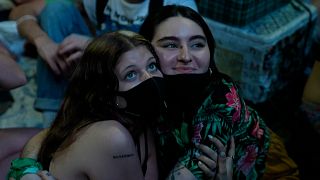 Argentina became one of only a handful of South American nations to legalise abortion on Wednesday, after hours of debate in the Senate.

Thousands of pro-choice activists cheered in the streets of the capital after the bill was approved 38 to 29, with one abstention.

It legalises voluntary abortions at any stage up to 14 weeks of pregnancy.

Ahead of the vote, pro-choice and anti-abortion demonstrators had gathered outside parliament despite coronavirus fears.

The vote overturns a similar one in 2018 which, although also passed the lower house, ultimately foundered in the Senate by 38 votes to 31.