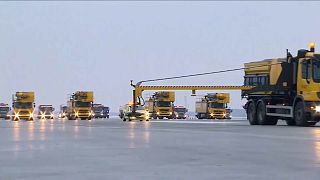 After the official opening and the ribbon cutting by senior managers at the airport, dozens of airfield vehicles marked the event.

"This is a special project, this is a level of the national airport, which shows the face of our capital. It's the entrance gate in our country. All those who arrive in our capital, begin to know it in the Sheremetyevo airport," said the First Deputy Chief of the Russian Economic Development Ministry Mikhail Babich at the opening ceremony.

The runway is three and a half kilometres long with a width of sixty metres.

The project was completed in nine months thanks to private investment.