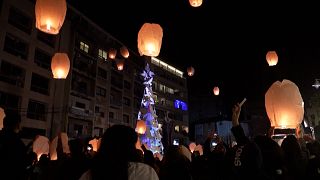 Residents released lanterns in Beirut's Gemmayzeh neighbourhood during the the lighting of a symbolic Christmas tree.

The lanterns were released in memory of the victims of the devastating August explosion at the Port of Beirut.

The explosion killed more than 200 people and injured thousands. Around 300,000 people were left homeless due to the widespread damage caused throughout much of the city.

It was decorated with uniforms of firefighters and rescue workers as a way to pay tribute to those who died in the blast.