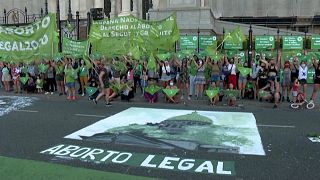 The bill passed in Argentina's lower house on December 11.

Backed by President Alberto Fernández, the law will now be voted on by the Senate on December 29.

The Senate voted two years ago against a similar bill to legalise abortion after it was narrowly approved by the lower house.

Latin America has some of the world's most restrictive abortion laws.

Currently, many women who have an abortion in Argentina, as well as people who assist them with the procedure, can face prosecution.

Exemptions are only considered in cases of rape or if pregnancy poses a risk to the mother's health.

The bill being debated would allow abortions to be carried out up to the fourteenth week of pregnancy.