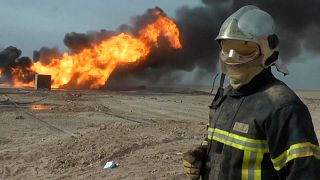 Firefighters from the Iraqi state-owned North Oil Company put out a fire at an oil well in the northern Khabbaz oil field believed to have been set by Islamist terror group Islamic State (IS).

Iraqi authorities have blamed the jihadist group for fires that have been raging for a week. IS has previously set oil fields aflame in Iraq.

The fire has blazed since December 9 when it is understood IS militants used explosives to start it, according to the Iraqi oil ministry.

The fire, at an oil well about 20 kilometres (12 miles) southwest of the city of Kirkuk in northern Iraq, was the second blaze at the 25,000 barrel-per-day Khabbaz field, the oil ministry said in a statement.