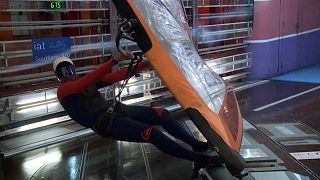 The Frenchman is developing a board prototype along with entrepreneur Marc Amerigo. Known as the Project Zephir, it's now in the testing phase, which has Albeau battling 70 km/h winds in a wind tunnel in order to assess the board's performance.

"This board does not exist yet. It's a three-year project. It will be something hybrid. My job is to get the fastest speeds under sail," said Amerigo.

Amerigo was the brains behind the world speed record in mountain biking on snow held by Eric Barone - nicknamed "the Red Baron" - which stands at 227.720 km/h.

Amerigo and Albeau only met six months ago. But since then the project has got carried away and in the IAT hangars, a multitude of measurements are being taken, with simulators, sensors and 3D scans.

"We're really going to analyse the air flows that Antoine (Albeau) will generate with his sail, really understand what's happening aerodynamically between Antoine and his sail, to try to optimise it," added Amerigo.

After the wind tunnel tests, the first half of 2021 will be devoted to "the design and production of the first prototypes of the sails and wingsuits of the future for Antoine and the improvement of current records in windsurfing and windfoil," he said.