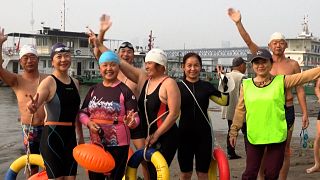 Wuhan river swimmers happy to be back after virus lockdown

Swimmers in Wuhan say they are glad to be back having a daily plunge in the Yangtze River after an enforced break during the coronavirus outbreak.

Wuhan, China, was where the first cases of COVID-19 were detected at the turn of the new year.

The subsequent lockdown meant no swimming from late January to early April.

But now they are back and braving winter temperatures of 15℃.

The tradition pre-dates Mao, but it was embedded in Wuhan's consciousness in 1966 when the then-73-year-old founder of communist China launched a political comeback with a carefully staged swim to prove he was in robust health.