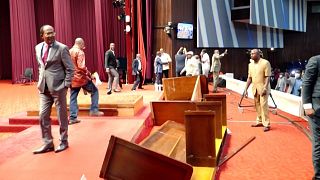 MPs turn over tables and throw chairs in parliament amid a political crisis in the Democratic Republic of the Congo.

It came a day after President Félix Tshisekedi announced the end of the governing coalition, which was formed in January last year with the parliamentary majority of Joseph Kabila, Tshisekedi predecessor as the country's head of state.

Tshisekedi also announced that he wanted to find a new majority, failing which he reserved the right to dissolve the parliament.