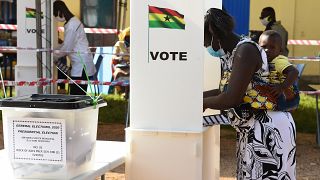 Ghana: Voters take to the polls to decide presidential election

People in Ghana are voting in an election that is set to be a close fight between President Nana Akufo-Addo and his longtime rival John Mahama.

They are among 12 candidates who are running, including three women.

"In view of the happenings on the continent, and, indeed in West Africa, the entire world is looking up to us to maintain our status as a beacon of democracy, peace and stability," Akufo-Addo said in a televised address.

The relative stability in Ghana contrasts with that of its West African neighbours Guinea and Ivory Coast that have seen deadly unrest this year.

Around 17 million people are eligible to vote to cast ballots for a new president and members of parliament for 275 seats. Key issues include unemployment, infrastructure, education and health.