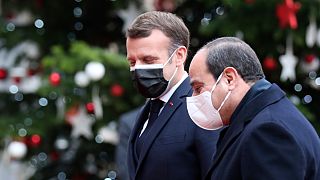 Egyptian President Abdel-Fattah el-Sissi is in France for talks on terrorism, the Libyan conflict and other regional issues amid heavy criticism over the Egyptian leader's crackdown on dissent.

The Egyptian head of state has overseen a large crackdown on critics, jailing thousands of Islamists along with pro-democracy activists.

Over 20 human rights groups denounced France’s strategic partnership with Egypt as the country “is abusively using counter-terrorist legislation to eradicate the legitimate work in favour of human rights and suppress all peaceful dissent in the country.” They called for a demonstration on Tuesday near the National Assembly in Paris.

El-Sissi has said that his tough rule has ensured stability, pointing to war and destruction in Syria, Yemen and Libya as the alternative.

At a press conference with French President Emmanuel Macron, el-Sissi said: "You cannot present the state of Egypt, with all that it has done for its people and for stability in the region, with it being a dictatorship."

He said that religious values were more important than human values.

Macron said he had discussed the question of human rights with the Egyptian leader.

French authorities see Egypt as a key country in efforts to stabilise the troubled region, and Macron has warned that in the absence of Western support, Egypt could turn to the West's authoritarian rivals China and Russia.