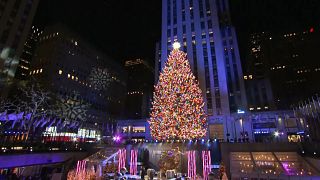 Rockin' around the Christmas tree looks will look different for visitors at New York City's Rockefeller Center this year, starting with the tree lighting ceremony.

What is normally a chaotic, crowded tourist hotspot during the holiday season was instead a mask-mandated, time-limited, socially distanced event due to the coronavirus pandemic.

The tree, a 23-metre Norway spruce, had its holiday lights turned on in an event that was broadcast on television but closed to the public.

On the other side of the world, Zagreb's streets and parks were lit up on Tuesday with Christmas decorations, but most areas appeared almost deserted as coronavirus restrictions limited gatherings.

The 30-metre-high red spruce, weighing seven tonnes, was put up by a crane right in front of the St Peter's Basilica.

People also gathered to watch the illumination of a Christmas tree in Ashrafieh neighbourhood in Beirut, which was hard hit by the devastating port explosion in August