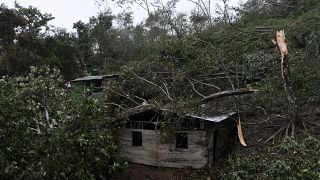 Residents of Haulover, near Bilwi, northern Nicaragua, begin to rebuild their village after being devastated by successive hurricanes Eta and Iota.

According to the International Federation of Red Cross and Red Crescent Societies, more than 4.3 million Central Americans, including 3 million Hondurans, were affected by Hurricane Eta alone. Those numbers only rose when Iota, another Category 4 storm, hit the region earlier in late November.

The hurricanes' destruction comes on top of the economic paralysis caused by the COVID-19 pandemic and the persistent violence and lack of jobs that have driven families north from Central America in great numbers during recent years. Add an element of hope from the incoming government of President-elect Joe Biden, and experts predict the region is on the verge of another mass migration.