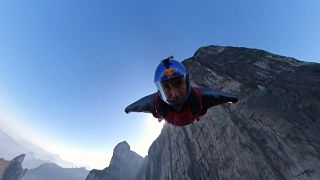 Any potential disaster is averted when he opens a parachute and drops gently to the ground, Asia's top wingsuit athlete in his element.

After China's decades-long focus on rigorous, state-controlled training in established sports, aimed at winning medals and national glory, Zhang is among a different breed of Chinese sports star that is inspiring the next generation.

Zhang's sport -- one of the most extreme in the world -- sees practitioners jump into the void from a mountain, a plane or a helicopter wearing a flexible, wing-shaped suit that allows 'human flight' in the form of a high-speed glide.

Custom-made in the United States, his red Batman-style suit cost more than 70,000 yuan ($10,000) and is emblazoned with a picture of the Great Wall, a symbol of his country.

Unlike the rest of the world, where many athletes are stuck at home due to anti-Covid restrictions, China has brought the virus almost completely under control.

That means Zhang has been able to return to training.

During a jump, the air rushes into the suit whose material goes rigid and generates lift, allowing him to glide in a more horizontal trajectory.

Zhang attended the first edition of the world championship the following year, held at the same location, and was hooked.

He left China to train in Europe and the United States, and by 2017 was among the best in the world.