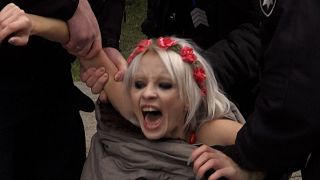 An activist from the feminist group Femen staged a topless protest outside the president's office in Kyiv on Wednesday, to mark the International Day for the Elimination of Violence against Women.

The activist demanded that Ukrainian authorities ratify the Istanbul Convention - the human rights treaty to prevent and combat violence against women and domestic violence.

Protests were also planned in Turkey and France.

Activist Anya Alian said women in Ukraine are unprotected from violence and this should count as discrimination.

"Stop violence against women" was written on her body as she protested.