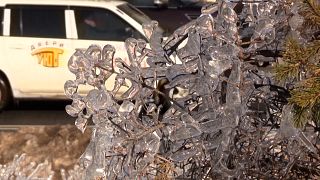 Freak ice storms following an abnormal weather phenomenon have left 150,000 people without water and electricity in the far eastern Russian city of Vladivostok and prompted a state of emergency.

The exceptional weather brought down cables and trees with the government of the Primorsky region declaring a state of emergency.

She said it could take "several days" to restore power.

He said in some places the resulting ice was 12 millimetres thick -- something not observed in the region in 30 years.