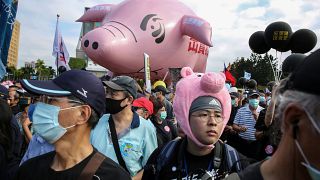 Thousands of people marched in Taipei's streets demanding to reverse a decision to allow US pork imports into Taiwan, alleging food safety issues.

President Tsai Ing-wen's administration lifted a longstanding ban on US pork and beef imports in August, in a move that is seen as one of the first steps towards possibly negotiating a bilateral trade agreement with the US.

That decision has met with fierce opposition, both by the opposition Kuomintang party and individual citizens.

The new policy allows imports of pork with acceptable residues of ractopamine, a drug added into animal feed that promotes the growth of lean meat that some farmers use in pigs.

The drug is banned by the European Union, but is legal in the United States.