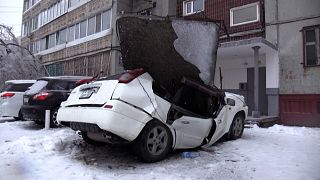 Freak ice storms have left 150,000 people without water and electricity in the far eastern Russian city of Vladivostok and prompted a state of emergency.

The exceptional weather brought down cables and trees, with the government of the Primorsky region declaring a state of emergency.

Photos and videos published by local authorities and on social media showed everything from apartment buildings to road signs to public transport covered in ice.

Video footage from a security camera showed a man moving away from his car at the last second as he was cleaning ice from its windshield before a block came crashing down from the side of a building.