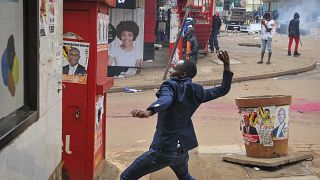 Three people died and dozens were injured in protests that broke out after the arrest of musician and presidential hopeful Bobi Wine, police said.

Wine's supporters blocked roads and burned tires in Kampala, prompting police to fire tear gas and bullets to disperse the protesters, after Wine was arrested in the eastern town of Luuka and taken to a police station in the city of Jinja.

Wine is seeking the presidency in next year's election.

Wine, who has been arrested many times in recent years, has captured the imagination of many Ugandans with his persistent calls for President Yoweri Museveni to retire after 36 years in power.