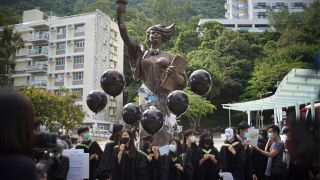 Dozens of graduating Hong Kong students displayed slogans that authorities have declared illegal in a rare act of defiance against a sweeping new national security law imposed on the city by Beijing.

The law was unveiled in June and outlawed certain political views, such as advocating for independence or greater autonomy from Beijing.

It has all but wiped out the mass democracy protests that rocked the city last year and has left swathes of the population too scared to speak out.

Anti-coronavirus bans on more than four people gathering in public have also stifled protests and stopped official graduation ceremonies from being held.

But small groups of students at the Chinese University of Hong Kong (CUHK) donned face masks and chanted protest slogans for an unofficial graduation day.

Among the slogans chanted and displayed were "Liberate Hong Kong. Revolution of our times" and "Hong Kong independent, the only way out".