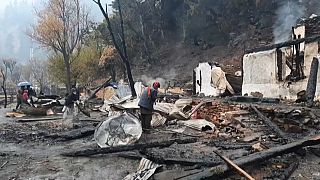 India and Pakistan traded blows on Friday in clashes that left more than 13 dead and dozens wounded on both sides of the disputed Kashmir frontier, officials said.

The village of Tehjian in the Neelum valley was shelled in Pakistani-controlled Kashmir and dozens of homes were set ablaze.

Artillery and machine gun clashes were reported all along the 740-kilometre ceasefire line that has separated the nuclear-armed rivals for the past 70 years, officials from the two sides said.

Hundreds of villagers were moved away from the so-called Line of Control (LoC) in Indian-controlled territory.

The new peak in tensions came only five days after three Indian soldiers and three militants were killed in an exchange of fire along the LoC.

Four Indian troops and four civilians, including an eight-year-old boy, were killed, army and police spokesmen said. At least 12 security forces and civilians were wounded.

On the other side of the border, Raja Farooq Haider, a senior minister in Pakistani Kashmir, said five people were killed and 31 wounded in the intense shelling on the Neelum and Jhelum valleys.