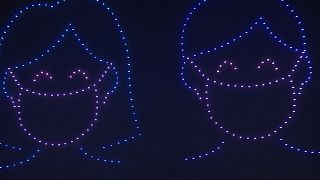 Organized by the South Korean government, more than 300 drones flew over the Seoul Olympic Park.

This was the second drone flash mob event this year, aimed at invigorating and encouraging the public to overcome the economic difficulties and COVID-19 challenges.

More than 120 of new cases were reported on Friday in densely populated Seoul metropolitan area, where officials have struggled to stem transmissions tied to various places, including hospitals, nursing homes, churches, schools, restaurants and offices.