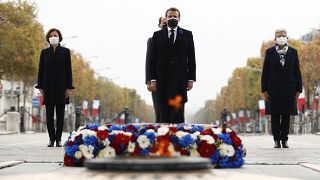 Moments of silence were observed in France and the United Kingdom amid several ceremonies marking the 102nd anniversary of Armistice Day.

The day commemorates the November 11, 1918 armistice ending World War I. It also pays tribute to those who died in the war.

French President Emmanuel Macron symbolically re-ignited the flame at the Tomb of the Unknown Soldier in Paris, exactly 100 years after remains of an unidentified fighter were first interred there. He also visited a statue of French leader Georges Clemenceau.

Macron also led a ceremony at the Panthéon.

In the UK, ceremonies were held at the Cenotaph, a memorial for those who died, as well as Westminster Abbey, and the National Memorial Arboretum.